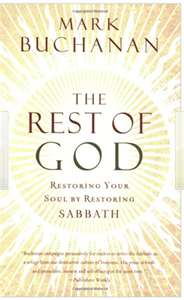 Who needs Sabbath? Isn't it an outdated concept from some old history book? Don't tell that to author and pastor Mark Buchanan.  In his book THE REST OF GOD-RESTORING YOUR SOUL BY RESTORING THE SABBATH (2006, W. Publishing Group) Buchanan tackles the 'ancient' subject. In his mind we all need a time to rest. Whether you're a college student busy with papers and exams or a parent trying to take care of your kids and all that entails, it is a good and healthy thing to take one day a week-it need not be Sunday, and refresh yourself. God gave us Sabbath as a gift. Not only do we need to take a day a week to rest, we need to find times during our busy week to remember, reflect and anticipate. We need to reflect on who we are, who God is, what really matters to us.  A main enemy of Sabbath keeping is busyness.
The Sabbath points towards the eternal rest we will experience in heaven.  If we experienced perfect rest here, we would have no need for heaven.  Our citizenship is in heaven.
Buchanan challenges the old idea of Sabbath being a time where you could have no fun. Not so many generations ago, you couldn't even throw a ball on the Sabbath.  Buchanan says legalism then, is another enemy of Sabbath keeping. On the Sabbath he says, we should do things that aren't necessary and things that we enjoy doing.
I have to admit I wondered how one could write a whole book on the Sabbath, but Buchanan has done just that and done it well.  He is a skilled writer.  If you find your life spinning out of control, with all your obligations and pressures pushing in on every side, I recommend finding time to read this book which offers solid practical advice on how to keep the Sabbath meaningfully, and find your center again.
Posted by Dave at 9:17:00 PM
Email ThisBlogThis!Share to TwitterShare to FacebookShare to Pinterest

SOMEWHERE DOWN THE ROAD 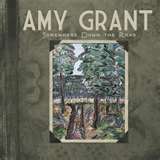 Amy Grant describes SOMEWHERE DOWN THE ROAD (2010, EMI) as a "collection of songs about the journey of life."  The songs on this collection were written between 1982 and 2009.  Four of the songs are from 1997.  Amy writes: "I was asking a lot of questions about truth and reality in those last couple of years of my first marriage.  With so much uncertainty in my life, music was a safe place to explore the landscape."  Three of the four tracks from this period are co-written by Wayne Kirkpatrick.  'Every Road' is mellow, and like so many of Grant's songs over the years, could be addressed to God or a human love interest.  'Somewhere down the Road' is about the things we don't understand, and assures the listener that one day we will have answers to our questions.  'Come into my World' is a rough recording featuring just Amy and a guitar.  It is about someone whose life is falling apart and expresses a desire for companionship during the process.
Six of the songs are from 2009.  The album opener, 'Better than a Hallelujah' is inspirational and speaks of how God wants communion with us: "We pour out our miseries, God just hears a melody/Beautiful the mess we are, the honest cries of breaking hearts/Are better than a hallelujah." 'Overnight' is a duet with her then seventeen year old daughter, Sarah Chapman, who has a pleasant voice.  It is a song for the impatient and the weary: "If it all just happened overnight/You would never learn to believe what you cannot see."  'Find what you're looking for', co-written by Mindy Smith is a tune about how to treat each other: "Haven't we all learned the best life lessons/By falling and falling down hard/If we're looking for somebody's failures/We won't have to look very far."  Two tracks, 'Hard Times' and 'Third World Woman' would have fit nicely on Amy's LEAD ME ON record.
Also included on SOMEWHERE DOWN THE ROAD are a 2010 version of 'Arms of Love', originally recorded on 1982's AGE TO AGE, and 2001's 'Imagine/Sing the Wondrous Love of Jesus' from LEGACY...HYMNS AND FAITH.
Amy Grant brings a seasoned artistry to this CD.  She also utilizes many talented performers including Vince Gill, Greg Morrow, and Chris Rodriguez.  I'm giving this light pop release a 4.5 stars out of 5.  Now 50 years old, I look forward to what she does next!
Posted by Dave at 1:56:00 PM
Email ThisBlogThis!Share to TwitterShare to FacebookShare to Pinterest
Newer Posts Older Posts Home
Subscribe to: Posts (Atom)

Dave
I live in St. Thomas, Ontario, but am originally from Port Burwell, Ontario. I have two wonderful kids, a daughter and a son.