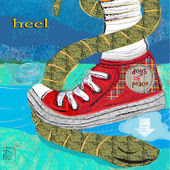 Long time Contemporary Christian Music fans will remember what a treat the album SPEAK (1996, Sparrow) by Dogs of Peace was.  Well, fast forward to 2016 and the Dogs are back with a dandy new project, HEEL (Suite 28 C Records).  The group members are: Gordon Kennedy (vocals, guitars), Jimmie Sloas (vocals, bass), Blair Masters (keyboards, background vocals), and John Hammond (drums, percussion).  Kennedy is a former member of White Heart and Sloas is a former member of The Imperials.  Besides this, the group members have either written for, or worked with, the likes of Eric Clapton, Keith Urban, Twila Paris, and many, many more artists.  HEEL was co-produced by Dogs of Peace and Jeff Balding.  Balding’s credits include Little Big Town, Taylor Swift, and Don Henley.  In the CD booklet Gordon Kennedy thanks the Lord: “If the only thing that ever happens with this music is that we place it before You and You find it to be a fragrant offering, then ‘Amen’”.


Starting things off is one of five songs solely penned by Kennedy, ‘One Flight Away’.  It is a classic rock song that reflects on our mortality and on eternity: “The world knew my mother for just 50 years/She wasn’t here long/While she was here/She prayed for my soul (3X)/I see my connection/It’s one flight away/The terminal beckons/Until that day/Pray for my soul (3X)”.  ‘Sacrifice’ is an experimental classic rock track that expresses gratitude for the atonement which paid for and erased our sins: “Oh/This is a self made wound/It was me all the time/So how can it be/The blood that covers me/I see it is not mine/What a sacrifice (2X)/Love was the device/What a sacrifice”.


‘Dark Without’ incorporates a heavy, percussive, march-like beat and a great lead vocal.  It also offers a blunt commentary on society that evangelical Christians will really relate to: “There’s a lunatic gunman/And a group of children at play/Not before this thing begins/Only when it ends will they let us in to pray/Dark without, Christ within (2X).../See the moral compass/We can see it fade into night/We are losing our direction/We are seeing our reflection/When there is no light/Dark without, Christ within (2X)”.  ‘If it Weren’t for You’ is a short, softer, more laid back song that openly admits it is God who gives us true purpose and meaning: “There is me the self made man/There is me without a plan/All of I that I can stand/If it weren’t for You/There’s a puzzle with no peace/And a hurt with no relief/No turning a new leaf/If it weren’t for You”.


‘All this for a Piece of Fruit’ is a catchy pop/rock number that is told creatively from the perspective of Adam and Eve and is about the fall of humankind: “Just left paradise, shut the door/We had forgotten what we came here for/There was a voice said we could have it all/We took the bite, we took the fall/Now all this for a piece of fruit/A serpent’s wish for a twist of truth/We got applesauce on our birthday suit/Now all this for a piece of fruit”.  Ricky Skaggs plays mandolin on the fast-paced ‘Only the Gold’.  It clearly rebukes the devil:  “I know you and what you’re doing/You want me to follow you to ruin/My soul is not for sale though you try to buy it still/Only the gold that is God ever will.../I was walking through this world your prisoner/I signed my name, then came the finer print/I was condemned/I turned to Him, my Savior”.


Michael Omartian, who co-produced the ‘Happy Days’ tv show theme song back in the day, plays piano on the pop/rock song ‘Friend of the Groom’.  It gleefully anticipates Heaven: “Friends and family/Good Christian travelers/The ones who got there early/Waving to me/Angels and ushers/They’ve been waiting for me/I see them in that room/Seat me with friends of the groom/I stepped inside to see with my eyes/The Christ who died for His bride/I see Him in that room/Let me in/Friend of the groom”.  Kennedy, Masters, and Hammond wrote ‘Healed’.  Mainstream rock legend Peter Frampton plays terrific solo guitar on it.  This song looks at our mortality in a positive light: “We’re only temporary, then gone with the wind/But if we’re with Him/We won’t disappear/Heaven comes clear/Yeah, that’s the deal/And there’ll be a day/When time will give way/We may not ever leave this world cured/But we can leave it healed”.


The next song ‘He’s the Light of the World’, is a rock one that features guest vocalists Joel Hanson of PFR, Rick Florian of White Heart, and The McCrary Sisters.  It offers these words of testimony: “Now the Son has come up/I’ll never be the same/Feel my spirit rise up/At the sound of His Name/He’s the light of the world.../Jesus, He is matchless/See the wounds of God’s wrath/Brilliant in the chaos/Illuminating my path/With the light of the world”.  What follows is a great medley of three songs that runs over nine and a half minutes long.  The songs declare what God has done and can do, and encourage us to be a Christian witness to those around us.


Last up on the physical CD is a short, bluesy guitar instrumental version of ‘Amazing Grace’, which is a nice note to end on.  Now, if you buy the album on iTunes you get a bonus track called ‘Crush’.  It is also on Youtube.  This splendid rock song is aimed at the devil, our enemy: “You threaten me with unforgiveness/You would condemn me with the past/You know that He has made me blameless/You see your time is going fast/I feel something under my shoe/I got to crush on you!/I’ll have the covenant blessing/I’ll have the pardon for sin/I’ll have none of what you’re sayin’”.


HEEL is a must have for collectors of CCM music and good music on the whole  The instrumentation, particularly Gordon Kennedy’s guitar work, is something that will make you want to play this record over and over again.  The artistry is second to none and it is easy to see why these guys are such highly sought after musicians to work with.  A second strength of HEEL is the lyrical content.  The basics of the Christian faith are shared in a clear, concise manner without sounding trite or holier-than-thou.  The vocals are pleasant, but not as memorable as those of bigger named CCM stars.  The artwork contained on and in the CD booklet by Nathaniel Mather is just wonderful!  I’m rating this album 93%.  For more info visit: www.dogsofpeace.com and www.suite28records.com.

Dave
I live in St. Thomas, Ontario, but am originally from Port Burwell, Ontario. I have two wonderful kids, a daughter and a son.